THE COAL MEN “Pushed To The Side” (Vaskaleedez Records)

When you think about Nashville, chances are you think about women in rhinestones and spangles, men in cowboy hats, boots and spurs, inevitably those bro-tastic backwards baseball caps.

40 years ago the charts were populated by Willie, Waylon, Merle, George, some Johnnys’ (Cash and Paycheck), and some Charlies’ (Rich and Pride). These days names like Blake, Jake, Luke, Brantley, Brad, Tucker and Kip, (seriously, Kip) rule the airwaves.

Luckily, anyone yearning for music a little less genetically modified and a little more home grown will be relieved to find that kind of authenticity is still readily available in Music City. You just know where to look.

Artists like Sturgill Simpson and Chris Stapleton have flipped the script, concentrating more on song craft than showmanship. By dispensing with the artifice they’ve each gotten down to the grit and grain of Country music, opening the door for other like-minded artists.

Dave Coleman is one of Nashville’s best kept secrets. He grew up near the Big Fork National River, in rural east Tennessee. He considered becoming a park ranger like his mother, but those plans changed once began playing music in his first band. Rock & Roll was his first love but he soon became inspired by Country outliers like Dwight Yoakam, Marty Stuart and Billy Joe Shaver.

Just as he was finishing his studies at Nashville’s Belmont University, Dave signed a publishing deal with Acuff-Rose. The venerable publishing house began in 1942 and was responsible for hits from Elvis Presley, Roy Orbison and the Everly Brothers. It was around this time he hooked up with drummer Dave Ray.

The duo began gigging around Nashville at the end of the 20th century as the Coal Men. They also made ends meet playing on sessions and touring with artists like Matthew Ryan, Jessi Alexander and Taylor Swift. Mentored by the likes of John Prine, Todd Snider, Buddy Miller, members of the Mavericks and the Delevantes, slowly but surely they built a solid following.

Between 2001 and 2013 they recorded an EP, and four full-length records. Nowhere’s Too Far arrived in 2004, Kids With Songs popped up in 2006. A year later they released Beauty Is A Moment. Bassist Paul Slivka, who made his bones with Tommy Conwell & The Young Rumblers, Tony Joe White and Tommy Womack, joined the fold in 2011. Two years later the trio recorded Escalator.

Since then, their music has been featured in hit television series like “Nashville,” “The Deadliest Catch” and “Sons Of Anarchy.” Several times a year they spend week-long residencies at the infamous Key West venue, Hog’s Breath Saloon. Now the band has returned with their latest long-player, Pushed To The Side. 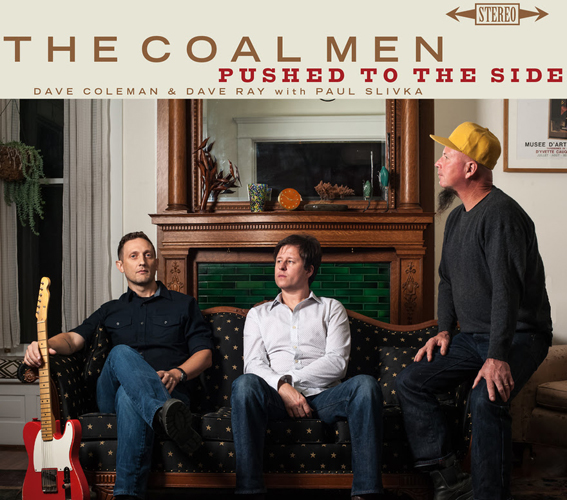 The album glides into gear with “Depreciate.” Over a teardrop rhythm, languid Spanish guitars and roiling bass-lines comes Coleman’s slow-as-molasses vocals. The lyrics offer a crisp metaphor for aging: the decrepitude of the touring van, from the van’s point of view. “I’m ready for the junkyard, counting down the miles/I can’t remember all my travels, but boy I road’em out in style.”

Three tracks, “Willy Jett,” “Lilly Hurst” and “Travis” co-written with Jeff Wickland, offer the kind of rich and evocative storytelling woefully absent from today’s “I got drunk in my truck and put my toes in the sand” Country music. Downcast baritone guitar notes and a kick-drum beat open “Willy…” The lyrics weave a vivid yarn of a lonely coal miner.

After a brutal week in the mines he seeks solace in alcohol and paid companionship; “Willy came down from the coal camp, dreaming of a woman on his arm/And he found one down on the corner, Lily took him with all of her charms.” Of course, hard living has taken a toll…”He lived by a quicker minute, and drifts further away each night/Bound by the weight of hunger, the burden of an appetite.”

Sun-dappled guitar, a wash of keys and tick-tock percussion anchor “Lily Hurst.” The lilting melody and instrumentation belies what is essentially a traditional murder ballad. Lily is the same working girl that hooks up with Willy, but this time she runs afoul of a jealous customer “needin’ comfort and rest,” but finding Lily already “doin’ what she did best.” The end isn’t pretty; “Which man she was with, I guess I never did hear/ He drew a line left Lily bleeding ear to ear.”

“Travis,” is the saddest saga of all. Honeyed guitar licks brush up against a supple shuffle-rhythm and roiling bass. With an economy of language the song sketches a portrait of teenage ennui at the tipping point; “Travis lived ‘cross town by the railroad track, just his dad and four walls of a dying shotgun shack/His mind was restless, it ached and it groaned/He walked this town, head hung down, most days he stayed stoned.” His suicide is swift, but Coleman reserves his righteous indignation for the indifferent town that never saw it coming.

Three tracks take a break from (to paraphrase Mr. Mojo-Risen) from wallowing in the mire. “The Payoff” is a hard-charging tune powered by a bludgeoning back-beat, driving guitars and Coleman’s rough-hewn vocals. The message here is the end rarely justifies the means.

“Fast Driver” is a sly charmer. Snap-back bass, rattle-trap rhythms and wicked guitar licks take a backseat to Coleman’s lascivious drawl. He almost has the listener convinced that he’s the first guy ever to use driving = sex metaphor. Meanwhile, “Speeding Like A Demon” hooks a shaggy dog, ‘speeding to reach the gig’ yarn to an infectious melody that’s equal parts Bakersfield Buckaroo and Cash-tastic boom-chicka-boom.

The action slows for two songs, “Faithless Eyes” and “A Name.” The former is a twangy two-step that is a kissin’ cousin to the Eagles’ “Lyin Eyes.” The latter is a High Lonesome haiku that notes no matter how we try to out run our legacies, DNA doesn’t lie.

The Coal Men completely color outside the lines on the tribal “Stones River” and on the gutbucket blues of the title track. “The Singer (In Louisville)” closes out the album. A clangorous note of feedback provides a through-line that crackles and sparks for the entire song. With a few deft strokes Coleman presents a not-so-glamorous portrait of life as a working musician. It’s a rollicking end to a great album.

Pushed To The Side is keen and uncluttered. The music of the Coal Men may not be famous, but it’s authentic.